Home » Things To Do In Marietta Ohio 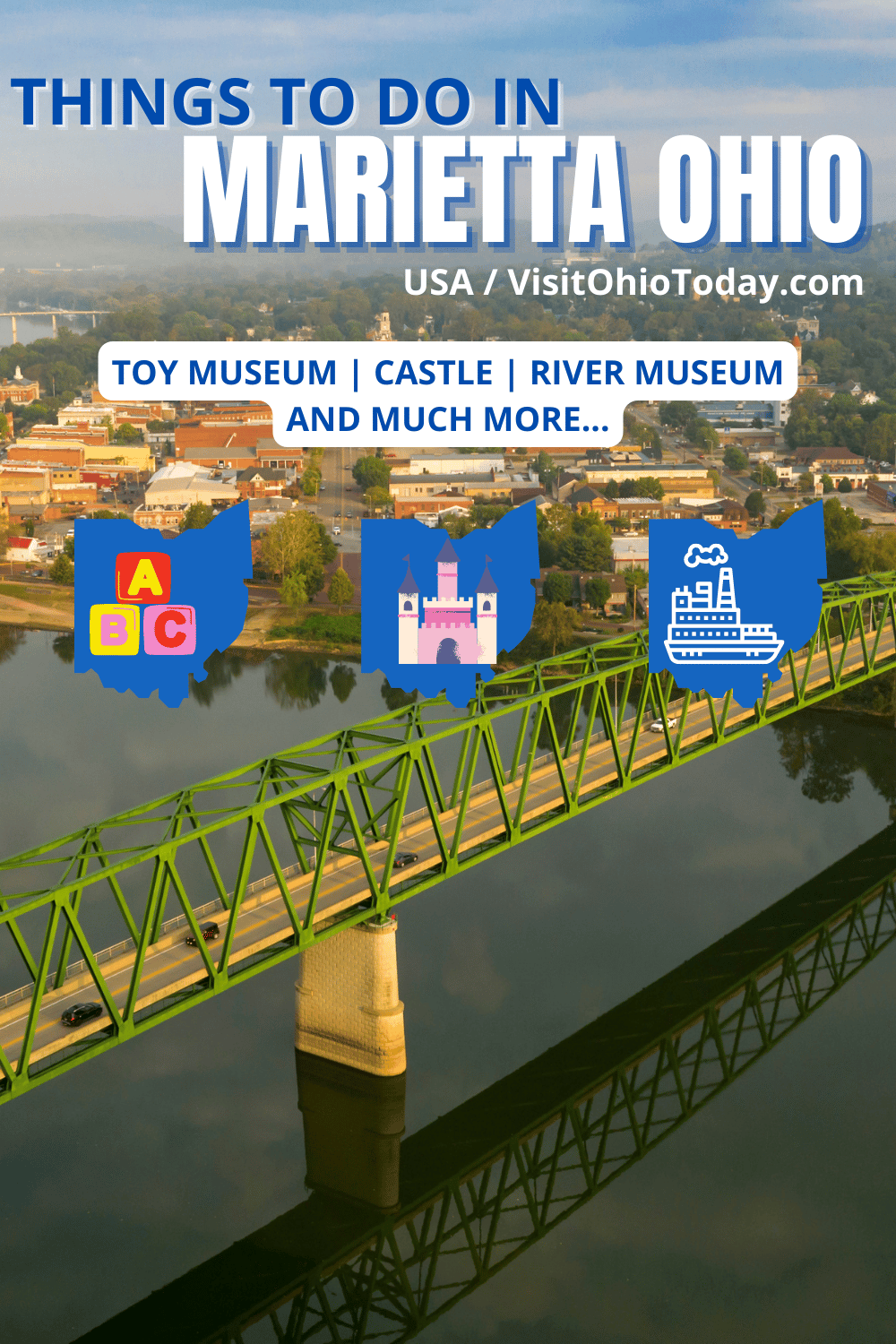 Whether you would like to visit a museum, go for a drink or grab a bite to eat, the small city of Marietta has something for everyone. We can provide tips on things to do in Marietta Ohio!

Jump to points of interest: Campus Martius Museum | Mound Cemetery | The Castle | Ohio River Museum | The Basilica Of St. Mary The Assumption | Children’s Toy And Doll Museum | Other things to do in Marietta | Reviews

CAMPUS MARTIUS MUSEUM (THINGS TO DO IN MARIETTA OHIO)

The city of Marietta was the first permanent settlement in the Northwest Territory. The name was chosen after Marie Antionette as she supplied French backing for the Colonies in the Revolutionary War. The Campus Martius Museum is located on the corner of Washington and Second Streets in Marietta. This building was erected in 1928.

The original fortification was built to house members of the Ohio company during the Ohio Indian Wars of 1790 to 1794. In 1795 a treaty was signed and the stockade was no longer required. The buildings were dismantled and the wood from this was used for the construction of some of the new homes.

The Rufus Putnam House was part of the original stockade and it is enclosed inside the museum. Rufust Putnam and his wife remained in the house until their deaths. The house was restored by the Ohio Historical Society between 1966 and 1972.

Various events do take place within the Museum. Guests can either phone ahead or go onto the website.

A SHORT VIDEO WALKTHROUGH OF A DAY IN MARIETTA

MOUND CEMETERY (THINGS TO DO IN MARIETTA OHIO)

Mound Cemetery in Marietta, Ohio was developed around the base of a prehistoric Adena burial mound. The City Fathers preserved the great mound from destruction by establishing the city cemetery in 1801.

The City of Marietta was developed in 1788 soon after the Revolutionary War. Many of its founders were Officers from the Revolutionary War who had received federal grants for their service. High ranking officers that are buried at this cemetery include Rufus Outnam and Benjamin Tupper, who were the founders of the Ohio Company of Associates.The cemetery has the highest number of burials of American Revolutionary War officers in the country.

The cemetery is open between the hours of 9am-5pm.

A SHORT VIDEO OF MOUND CEMETERY

THE CASTLE (THINGS TO DO IN MARIETTA OHIO)

The castle was home to some of the most influential citizens who lived in Marietta. The property was first leased back in 1808 to a potter. The Gothic Revival House was built in 1855 and a carriage house was built three years later.

The Castle was known as a site where business and functions took place. Five families lived in The Castle between the years of 1808 and 1974.

The Castle opened for tours in 1994. At this time, the house was furnished with antiques that were placed in the house by the Bosleys. There were also donations by other families that lived in Marietta. Tours are available to schools and colleges. If you would like to visit The Castle and go on a tour, you can either call them or pop them an email.

OHIO RIVER MUSEUM (THINGS TO DO IN MARIETTA OHIO)

In 1939, there was an idea to have a Ohio River Museum and this was for preserving the history of the inland rivers that was proposed by a group of rivermen and historians. On 16th March 1941,The Ohio Historical Society, (currently the Ohio History Connection), could see a vision of developing this area and offered the unfinished basement in the Campus Martius Museum. This space was soon filled with photographs, models and items of historical interest. The collection continued to grow over the years and this included the 179-foot sternwheel towboat, the W.P Snyder.  This boat was built back in 1918.

As the visits for these displays continued, The Ohio Historical Society saw the need for a seperate Ohio river museum in its own right. In the early 1970s, planning started and this ended up with a new facility. Construction of this facility began in 1971 and the museum opened in 1973. The Museum was built on the banks of the River and close to the Steamboat.

THE BASILICA OF ST. MARY THE ASSUMPTION (THINGS TO DO IN MARIETTA OHIO)

Catholic worship on this site dates back to 1749. In the 1830s, a priest administered rights for catholics in Marietta. The priest would conduct mass in 'the little brick house of one Felix McGuire' at the corner of South Fifth and Hart Streets. By 1838, the catholic population was large enough that the Bishop of Cincinnati appointed a Full Time priest in Washington County.

In 1837, the Bishop purchased two lots and constructed a small structure. The lower floor of the building was used to conduct mass until 1853. After a while, the building was condemned as unsafe. The roof was too heavy for the walls of the building and it was collapsing. The Parish did look at moving away from the site.  However, the parish decided to rebuild on this site by strengthening the walls and adding roof support.

During the next decade, a spire was added and three bells were placed in the tower. After some serious flooding, the congregation decided that they needed to move to another location. The congregation approved the move to Fourth and Wooster street.

The Church served the population from those days until now. The most dramatic episode in the church's history came in 2013. Pope Francis approved the Church's elevation to a Basilica. As a Basilica, St. Mary's shares the same standing and relationship with the Holy See (AKA the See of Rome). The Basilica is entitled to use the Papal symbols. The basilica was inaugurated at a solemn Mass on November 5, 2014.

The Basilica of Saint Mary of the Assumption is located at: 506 Fourth Street, Marietta, Ohio 45750. Phone | Website | Email | Facebook

CHILDREN'S TOY AND DOLL MUSEUM (THINGS TO DO IN MARIETTA OHIO)

The Children’s Toy And Doll Museum offers a glimpse of the past into how children were entertained in the 1800s and the early 1900s. The Museum has nine rooms that display both vintage and antique dolls and toys. Some of the vintage dolls that are on display include:

There are also miniature houses and larger models of houses. There is also a large Hansel and Gretel Gingerbread House. Visitors will also find handmade scale models of circus wagons, city landmarks, plus antique games from back in the day. Visitors may also wish to take part in a tour of the Museum and this includes seeing different types of rooms.

Free parking is available at the Museum.

ARE THERE OTHER THINGS TO DO IN MARIETTA OHIO?

Absolutely! There are plenty of other places to visit in this charming city:

WHAT ARE PEOPLE SAYING ABOUT MARIETTA OHIO?

"I was a history major in college and once taught Ohio history so getting to see this building was incredible for me. Not only is the oldest home in Ohio located there but the oldest building in Ohio as well..." - BB (Cleveland, OH.) Aug 2022.

"This old cemetery is located in the middle of an old residential area of Marietta. Easy to access, there is street parking, not drivable inside the cemetery. There are many of the early settlers of Marietta buried here including Revolutionary War veterans..." - TTW012 (Rochester, MN.) July 2022.

"We really enjoyed our visit here. This is truly a beautiful building. It's in excellent condition. Our docent was new (she said it was her 4th tour), and did an excellent job. We really enjoyed hearing the stories of the building and the people who lived there. If you're interested in historical buildings, this is definitely worth a visit." - CB (Marysville, OH. June 2022).

"The museum consists of several buildings, from utensils and components of river boats, to photos and historical curiosities. The final finish is fantastic, as you access a ship of the time that is now preserved as a museum. The gentleman who gave us the great guided tour, you could tell he lived it and was always willing to answer any questions." - 3TL (Barcelona, Spain.) September 2015.

"Just amazing that a city the size of Marietta (about 13,000, I think) would have a Basilica such as this. Very beautiful inside; we went in during the day time, and also the Trolley Tour stops here and goes inside. Well worth it." - SDR (Freemont, USA.) July 2022.
"From the moment we entered we were greeted by the volunteers who staff the collection. The cost to enter is $4 for adults and $2 for children. The entry fee is a donation toward the collection. Staff hand you a laminated paper that has useful facts regarding the collection." - JF (Marietta, OH.) July 2019.

WHERE IS MARIETTA OHIO LOCATED?

Marietta is a city that is located in Washington County, Southeastern Ohio.

Have you visited Marietta Ohio? What was your favorite thing to do?

We are always building on our posts, so if we have not mentioned something you know about, please be sure to let us know about it in the comments!

If you love finding out about new things to do in Ohio, we have lots of suggestions!

We also love to find new Ohio adventures - you can check out some of our favorites right here!

Hello! We have done our very best to ensure that the accuracy of events, hours, addresses, etc are up to date. Please know that information can change due to weather, updated health and safety challenges, etc. If you find incorrect information, please send us an email and we can get it updated.

To be updated and stay connected, subscribe to our newsletter.